Pokhara is one of the most popular tourist destinations in Nepal. Many tourists visit Pokhara Valley to see the Himalayan range and lakes. Pokhara is also famous for boating, trekking, rafting and extreme sports like rafting, canoeing and bungee jumping. According to the Nepal Tourism Board, the number of international tourists to Pokhara in 2009 was 203,527, and the same year 509,956 international tourists visited Nepal and the number is increasing every year.

Recently, in Pokhara, the longest and fastest zip line in the world was built, which is 1850 m long and it begins at the top of the Sarangkot hill and it ends near Yamdi river. The zip line can reach a maximum speed of 140 km/h Riders can see views of 23000-foot Machapuchare mountain, Annapurna range and Seti river. There are visit to Mahendra cave -Bat cave and Paragliding, which is also done from Sarangkot,

Chitwan is heart of the jungle used to be a favorite hunting ground for Nepal’s ruling class during the cool winter seasons. Comfortable camps were set up for the feudal big game hunters and their entourage, where they stayed for a couple of months shooting hundreds of tigers, rhinoceroses, leopards and sloth bears. In 1950, Chitwan’s forest and grasslands extended over more than 2,600 km and was home to about 800 rhinos. When poor farmers from the mid-hills moved to the Chitwan Valley in search of arable land, the area was subsequently opened for settlement, and poaching of wildlife became rampant. When the first protected areas were established in Chitwan, Tharu communities were forced to relocate from their traditional lands. They were denied any right to own land and thus forced into a situation of landlessness and poverty. When the Chitwan National Park was designated, Nepalese soldiers destroyed the villages located inside the boundary of the park, burned down houses, and beat the people who tried to plough their fields. Some threatened Tharu people at gunpoint to leave.

Lumbini is a Buddhist pilgrimage site in the Rupandehi District It is the place where, according to Buddhist tradition, Queen Mayadevi gave birth to Siddhartha Gautama in 563 BCE. Gautama, who achieved Enlightenment some time around 528 BCE, became the Buddha and founded Buddhism. Lumbini is one of many magnets for pilgrimage that sprang up in places pivotal to the life of the Buddha. in 1896, General Khadga Samsher Rana discovered a great stone pillar at Rummindei, according to the crucial historical records made by the ancient Chiness monk-pilgrim Xuanzang in the 7th century and by another ancient Chinese monk-pilgrim Faxian in the early 5th century The Brahmi inscription on the pillar gives evidence that Ashoka, emperor of the Maurya Empire, visited the place in 3rd-century BCE and identified it as the birth-place of the Buddha. When King Devandmpriya Priyadarjsin had been anointed twenty years, he came himself and worshipped. He caused it to be announced that the Buddha Shakyamuni was born here and thereby caused to be created a strong desire. Lumbini was made a World Heritage Site status by UNESCO in 1997. In the Buddha’s time, Lumbini was situated in east of Kapilavastu and southwest Devadaha of Shakya kingdom of Nepal. According to Buddhist tradition, it was there, that the Buddha was born. 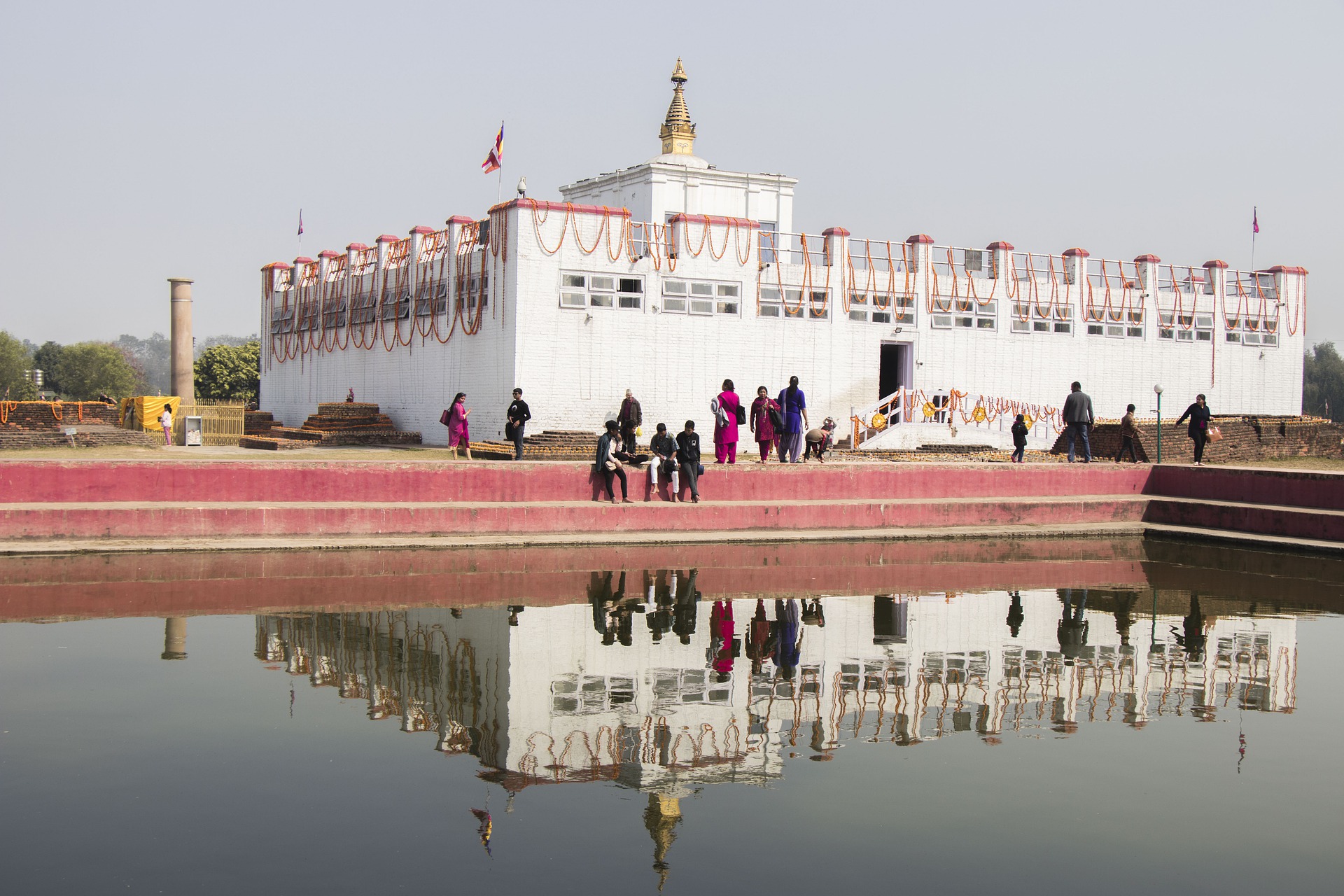