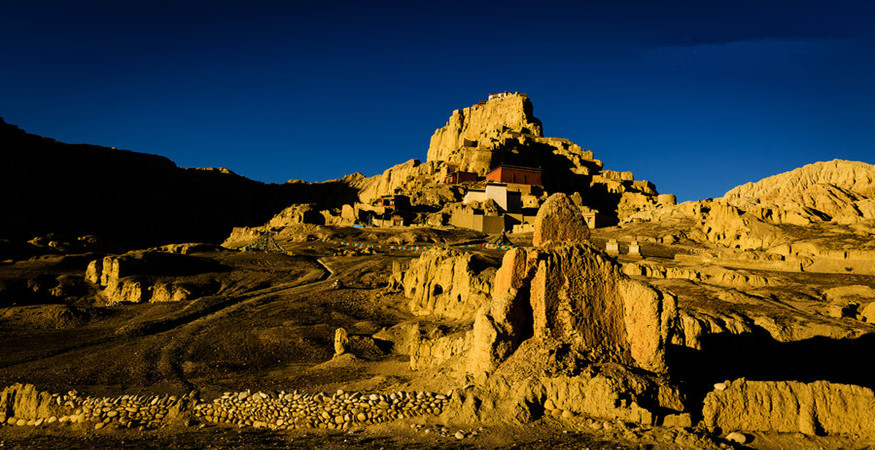 Purang Guge kingdom was a small Western Himalayan kingdom which was founded and flourished in the 10th century. It covered parts of remote western Tibet and northern Ladakh. The original capital was at Purang but was moved to Tholing in the Sutlej canyon southwest of Mount Kailash. It was divided into smaller kingdoms around the year 1100 CE. the last town before Tsaparang in the kingdom of Guge was then its capital, (163 miles from Darchen). It was founded by the great-grandson of Langdarma, who was assassinated, leading to the collapse of the Tibetan Empire. Buddhist monuments at both Tsaparang and Tholing are now mostly in ruins except for a few statues and scores of murals in good condition, painted in the western Tibetan style. While Langdarma persecuted Buddhism in Tibet, his grandson, King Yeshe who ruled the Guge Kingdom in the 10th century with Tholing as its capital, was responsible for the second revival or “second diffusion” He built Tholing Monastery in his capital city in the 997 AD along with two other temples built around the same time, Tabo Monastery in the Spiti Valley of Northeast India and Khochar Monastery (south of Purang); both these monasteries are functional.Tholing became an important centre for Indian scholars to visit and spread Buddhist religion and culture. Before that, at the initiative of the King, specially chosen batch of 21 young and bright students from the monastery were sent to India and Kashmir to be trained in Buddhism and to translate Sanskrit texts on religion and the Tibetan language and to study at Vikramashila, a specialist institution in tantra. Unfortunately 19 of them could not survive the climate, snake bites and diseases and only two monks, Rinchen Zangpo and Lekpai Sherap, survived. In 1042, the third king invited the Indian master Atisa to Guge. Later in the 11th century a Buddhist conference was arranged at Gyatsa Jhakhang (also known as Yeshe-O Temple), an original 10th-century temple now in ruins. The Indian monk Atisha, stayed for three years at Tholing and became a famous master in Tibet. During his stay in Tholing, the famous Buddhist work he wrote was Lamp of The Path to Enlightenment. He along with the first Abbot, Bin-chen Bzang-po, of Tholing were responsible for introducing the South Asian art to Tibet, The famous murals are the 16 Vajara Dancers and The Birth of Sakyamuni, the founder of Buddhism. The influence of the Guge Kingdom, particularly the monastic center of Tholing, was felt from Kashmir to Assam in India also. Guge’s capital was shifted to Tsaparang by 15th century.. However, as result of local resentment at the Guge ruler’s persecution of Buddhism monks, they approached the kingdom of Ladakh to intervene. The Ladakhis, who had sought for many years to incorporate Guge into their domain, invaded the kingdom, expelling most of the Christians and destroying the church.